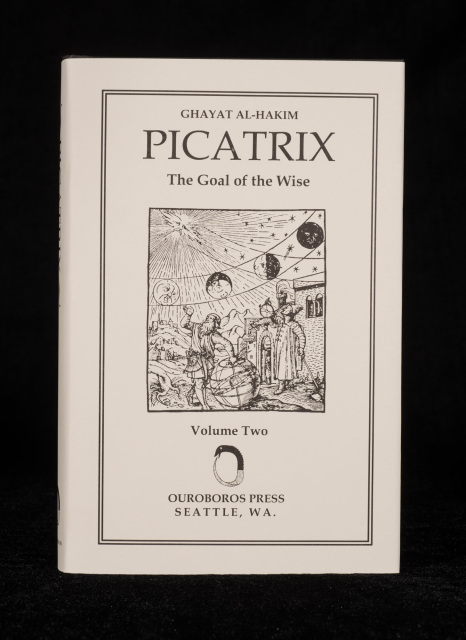 Picatrix Volume Two contains the 3rd and 4th books of Ghayat Al-Hakim and completes the English translation. It is a larger book than volume one and contains much in the way of the practical working of astral and talismanic magic. Planetary and Zodiacal magic and full instructions for invoking the related spirits are provided along with all the requisite materials needed: stones, plants, inks, colors, incenses, talismans, and the invocations.

In addition to this are many anecdotes relating to Arabic and pre-Islamic magical lore, including the writings of Ibn Wahshija, the Nabataeans, Sabians, Chaldeans and Assyrians. Of particular note is the magical plant and mineral lore from the Nabataean Agriculture, which portray ancient practices of pagan Iraq.

The influence of the Picatrix can be seen in several texts of well-known authors of the western esoteric tradition, including Ficino, Mirandola, Abano and Agrippa, whose works have played a major role in forming contemporary manifestations of the esoteric tradition today.

The Ouroboros Press edition, intended for English readers, is a translation based on the medieval [circa 10th century] Classical Arabic as opposed to the later Renaissance Latin translation. The Warburg Institute originally published the Arabic, German, and Latin editions which are often referred to by scholars and remain the only academic editions extant.