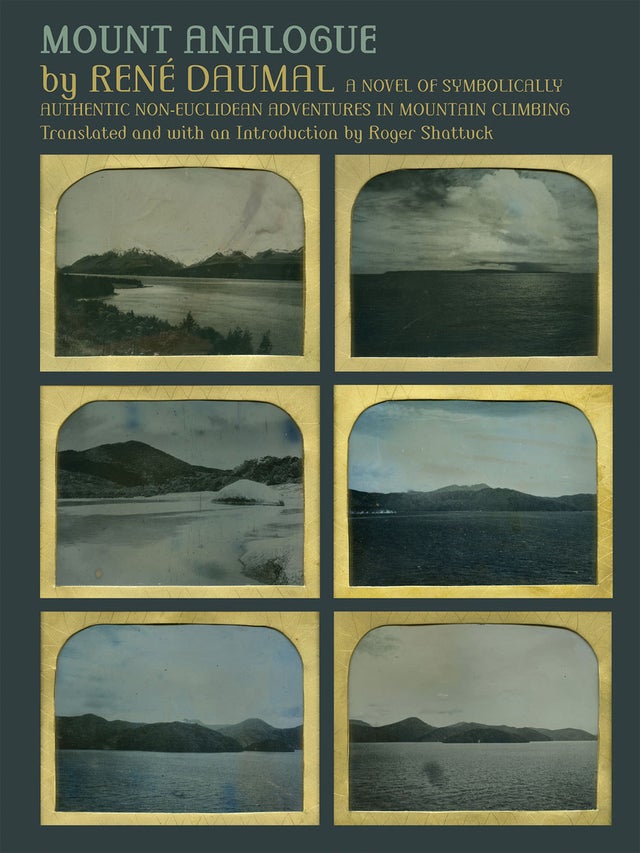 A Novel of Symbolically Authentic Non-Euclidean Adventures in Mountain Climbing

By René Daumal. Translation and introduction by Roger Shattuck. Postface by Véra Daumal.

A beloved cult classic of surrealism, pataphysics and Gurdjieffian mysticism, René Daumal’s Mount Analogue is the allegorical tale of an expedition to a mountain whose existence can only be deduced, not observed. As its numerous editions (most now rare) over the decades attest, the book has been highly influential: Alejandro Jodorowsky's visionary 1973 film The Holy Mountain is a loose adaptation of the book, and John Zorn based an eponymous album on it.

This edition, a gorgeous addition to the Exact Change list, brings the original 1959 English translation by Roger Shattuck—widely considered the best—back into print.

Left unfinished after Daumal’s death from tuberculosis in 1944—in mid-sentence, as he broke from writing to receive a visitor--Mount Analogue offers a compelling and philosophically resonant chronicle of a group of travelers seeking the titular mountain, based on the symbolic calculations of one Father Sogol (“Logos” spelled backward) and his students. As Daumal writes, “Mount Analogue is the symbolic mountain—the way that unites Heaven and Earth, a way which must exist in material and human form, otherwise our situation would be without hope.”

Translator Roger Shattuck, author of many volumes, is perhaps best known for his important book The Banquet Years, a history of the turn-of-the-century French avant-garde.

René Daumal (1908–44) was a literary prodigy in his teens, publishing poetry that attracted the attention of André Breton and the surrealists. Forging his own path instead of joining the group, he co-created and edited the influential literary journal Le Grand Jeu (1927–32), before turning his attentions to Eastern philosophy under the influence of Gurdjieff and Alexandre de Salzmann (model for the character Father Sogol in Mount Analogue). His early death from tuberculosis in 1944 left his masterpiece, Mount Analogue, unfinished; nonetheless it became his best-loved and most famous work.