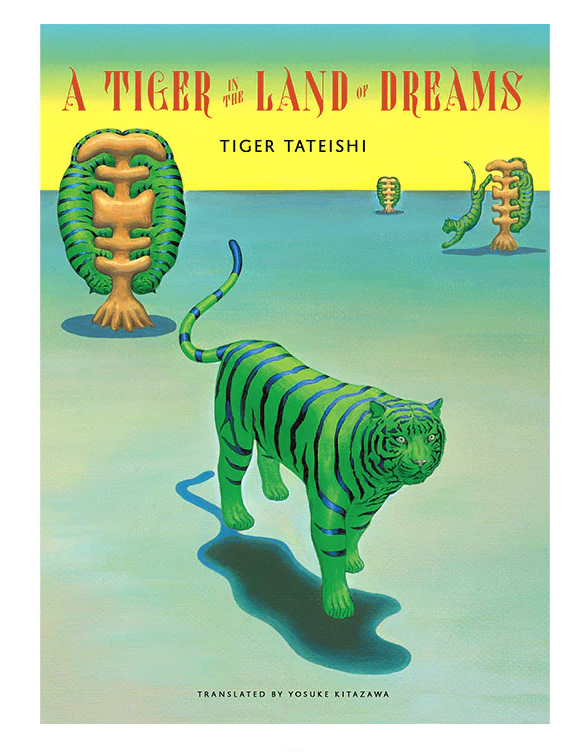 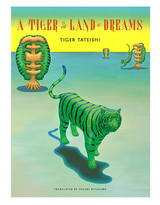 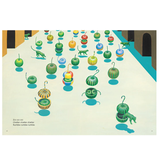 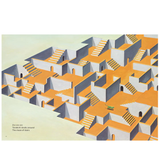 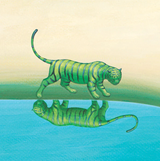 A Tiger in the Land of Dreams

A Tiger in the Land of Dreams is the first English-language edition of a legendary picture book from 1984. Tiger Tateishi, well-known in the worlds of art and comics, takes us on a journey through a surreal land with Torakichi, a constantly-morphing green tiger. The artist saw this strange tiger as a combination of an animal and a plant. Suitable for all ages, but this is the type of book you buy for the dreamy artwork.

"It may be time for you to take a trip to a strange land above the clouds where the tigers are green with blue stripes. It’s calming and odd and makes you feel like you have entered a dream. And, actually, you have entered the dream of Torakichi the Tiger. Torakichi oozes out of his translucent cube (of ice?), splashes in a pond, then transforms into a daruma-san, a fearsome looking god of luck without eyelids or limbs. There are Dali-esque adventures with Torakichi’s tail, and Escher-like stairs and mazes to wonder at."--Stephanie Tournas, Youth Services Book Review

“There’s no escaping the dream as long as this book is open.”--Yukiko Hiromatsu, author of Japanese Picturebooks: 100 Years, 100 Illustrators, 100 Books

About the author: Kōichi “Tiger” Tateishi worked in a variety of media including comic books, illustrated books, painting, sculpture and ceramics during his prolific career. Inspired by science fiction, including Robert Sheckley’s early stories, his enigmatic works explored reality and its limitations. In 1966, his work was featured in the acclaimed 15th Yomiuri Independent Exhibition. In 1969, Tateishi relocated to the city of Futurism, Milan in Italy, and began working in the studio of Ettore Sottsass, bringing the ideas of the architect and designer to life. During this time, Tateishi’s personal artwork moved closer to visual narratives as he made several oil tableaux infused with science-fiction themes. Upon his return to Japan in 1982, he produced daily comics embracing the nonsense genre. Tiger Tateishi passed away at only 56 years of age, but is fondly remembered for the zest and energy of his mind-bending works, which invigorated the Japanese pop-art scene.

About the translator: Yosuke Kitazawa is a Los Angeles-based writer and producer, whose work includes writings on music, history, and the Japanese American experience. He has produced numerous archival music projects, including the Grammy-nominated Japan Archival Series for Light in the Attic Records. He recently launched his own record label, Temporal Drift.